He was a contemporary of Leonardo da Vinci, only slightly older than Michelangelo, and perhaps the only Renaissance creator comparable to both of them in artistic stature and historical relevance. And yet you've probably never even heard his name. I am referring to the composer Josquin Desprez. Few musicians throughout history have enjoyed greater prestige among their contemporaries or have exerted a deeper and more lasting influence on those who followed them. Desprez was hailed in life as "the best composers of our time", the "father of musicians", "the master of all notes" – as Martin Luther referred to him.

Josquin developed his career in one stage of great musical changes, which would give way to an international musical language within Europe. He was one of the artists who helped guide this transition, incorporating the humanistic values ​​of the Renaissance into the world of music. Faced with the theoretical, cerebral and erudite music of the previous stage, his compositions show the influence of popular forms of the moment, such as the frottola a type of song with a simple texture (generally homophonic which means that all the voices move at the same time and complement the main one, following the same rhythm), easy-to-follow melodies, catchy refrains and a generally cheerful, casual or even ironic secular text. Within this desire to simplify music and bring it closer to his audience, Josquin was known for his gift for melody and his ability to link it to the text to make it more understandable. For him and other Renaissance composers, music had ceased to be a purely intellectual creation, the result of complex numerical and mute relationships. Music was, above all, an extension of human emotions and as such, it had to imitate the intonation of the actors who with their voice were capable of moving the audience.

And why do I tell you all this, you may ask. Well because I have a problem. I have a catchy song that comes into my head every two by three that was composed more than 500 years ago. The melody is this:

The cricket is probably the most popular frottola by Josquin Desprez. Ironic and tender, she talks about how "good cantore" the little insect is and how well it holds up long notes. Although it has also been speculated that Josquin could be referring to his friend the singer Carlo Grillo. Grillo was part of the musical chapel of Cardinal Ascanio Sforza, who, apparently, was quite cheap when it came to remunerating his musicians. Desprez could be aware of his partner's financial troubles and therefore composes this frottola with a double meaning, as a protest song. Read: Mr. Cardinal, pay the good Cricket, that unlike many birds, he is a faithful musician and sings for love.

The most striking thing about the song is that the music illustrates the text at various times and even imitates the song of the friendly bug! As soon as it starts, for example, when the letter that the cricket is capable of singing long notes or verses (long verse), the main melody stubbornly stops on an exaggeratedly long note, while the intermediate voices alternate to draw a kind of swaying : the rugged singing of the cricket itself. Later, the different singers take turns in an increasingly rapid texture of repeated notes that, again, recalls the vibrating sound of the cricket itself. 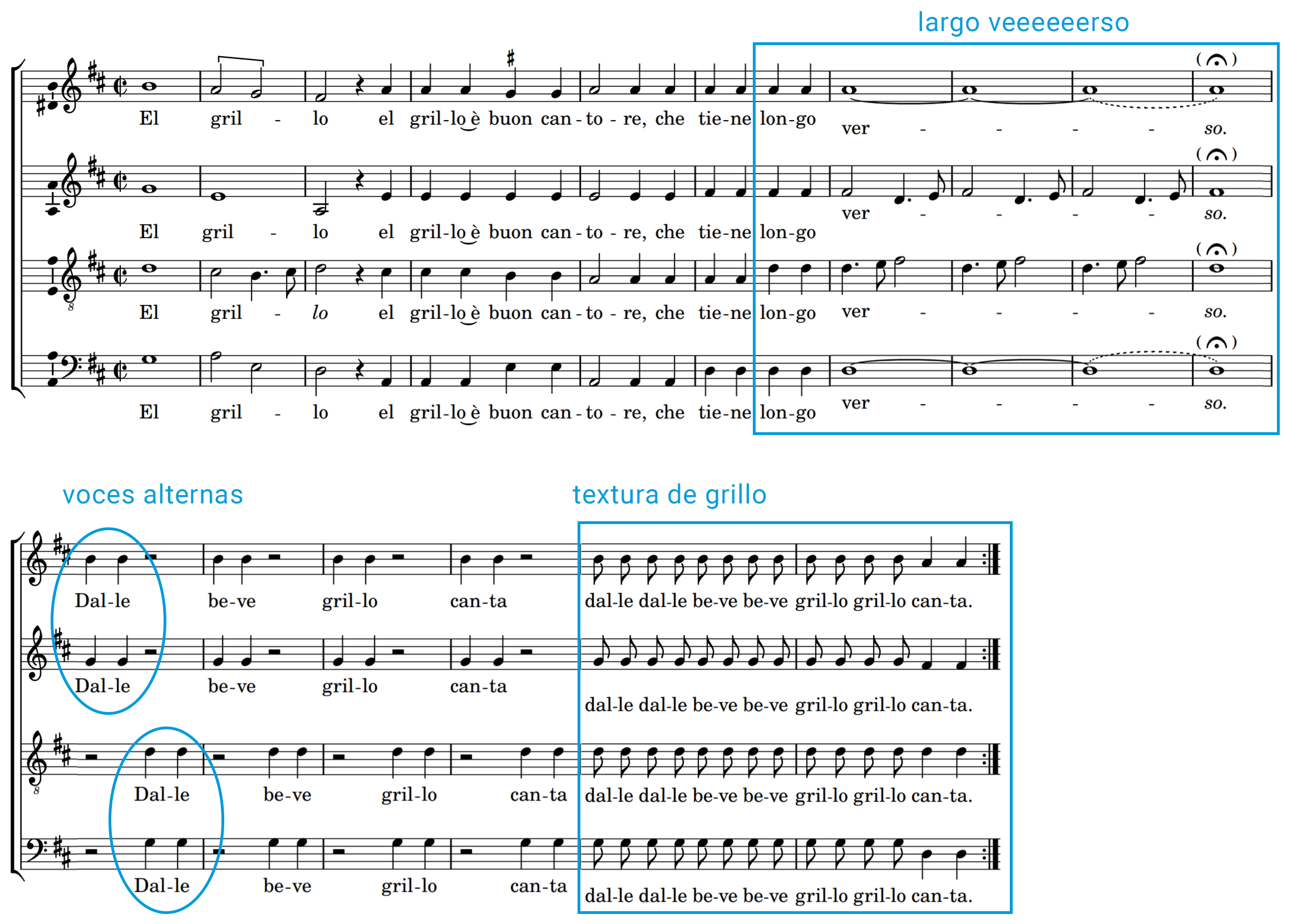 It is not an isolated example, others frottole of the time 1 imitate the sounds of the cat, the swan and the crane. Some have referred to this phenomenon as onomatopoeic music or, more generally, figuralism : music that “paints” its own lyrics or that imitates the sound of events that it usually only represents symbolically. It is a type of sound imitation that also occurs in language. In particular, it is common for some animal names to resemble the sound made by the critter they represent. The very word "cricket" is a good example of this. Grillo in Spanish, cricket in English, kilkerra in Basque, ikhilikithi in Zulu, jangonesio, jangonesio Kuriketto (ク リ ケ ッ ト) in Japanese, keulikes (크리켓) in Korean, kirikiti in Maori … it seems that the sharp and rough sound of the cricket is repeated there Humans speak his name. And, thanks to Josquin, also where they sing it.

1 Printed collection of frottole by Ottaviano Petrucci. The cricket appears in the third book Frottole III published in 1505.

The article An unknown genius of the Renaissance has been written in Notebook of Scientific Culture .

Will science ever run out?

January 17, 20214 min read
When a virus enters the cells of the infected organism, it makes use of the…